With news of a Great Northern Diver turning up just up the road in Lower Penn, I decided to pop over, making the most of a day off from work . It was a species I had not seen, and they had been popping up on many inland water bodies over the last few days, so it seemed wise to chance a low mileage " twitchette".

Aside from the very muddy path, this was a jaffa as it turned out, a twenty minute drive and a ten minute walk and I was watching the bird at close quarters, with just 2 other birders..perfect. The bird was doing plenty of diving and the occasional 'snorkel'

From here I decided to carry on up to Belvide. I fancied trying to catch up with a few species I had seen little of  lately, or even this year.I'm an WMBC member but don't visit Belvide nearly often enough, in fact it had been over 12 months since my last visit !
It was less than 30 mins up to the Resa' and I enjoyed a couple of hours watching the decent numbers of  ducks bobbing about, especially the numerous Goldeneye, which was a year first. There were plenty of Pochard, Wigeon, Teal, and Great Crested Grebes as well as a Lesser Black Backed Gull of note. It's always good as well to catch up with the Tree Sparrows, a bird I rarely see elsewhere. A Water Rail squealed it's presence too. With the expected Winter Thrushes and other passerines, it was an enjoyable couple of hours.
I was virtually alone on the reserve and leaving the West Hide at around 13.40 I passed a birder heading to where I had come from. It was most likely the author of Belvide Birding who later posted on his blog that, ironically, a Great Northern Diver had dropped in at 14.03 ! 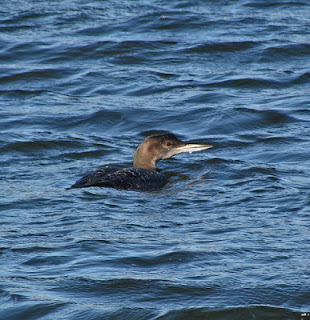 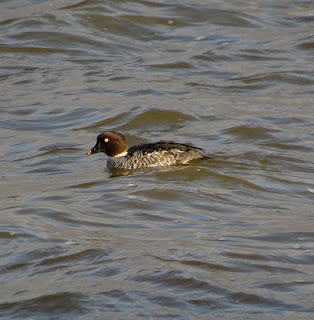 Waxwings on the Doorstep !

I started the morning around Ladies Pool. Last week I had connected with my 1st Brambling of the season around there, and yesterday I had noted the return of a Little Grebe, which seems to favour this spot at this time of year. Today there was a single ♀ Goosander at the furthest reaches of the lake, perhaps a result of the all the flooding locally ?
I was heading back to the car for the next leg of the patch tour, when I received news of 3 Waxwings just down the road at Rowberry's !
This was excellent news. Waxwings seem to have been popping up in every bloody county that borders Worcestershire lately, whilst stealthily  avoiding my neck of the woods. Anyway within 10 minutes I was pulling onto the car park of Rowberry's, hoping they were still around.
As soon as I opened the door I heard their lovely ringing call and enjoyed the birds coming down onto berries just a few feet away. After a few minutes it became evident there were more than the reported 3, and soon I counted 8 on site.
News had spread amongst the local Birders and there were soon half a dozen familiar faces there enjoying these exquisite birds, including Craig R, aka Midlands Birder . You can read about his encounter sometime in the New Year ( only joshing MB !). Craig kindly let me have a butcher's in his scope of the mature adult male, the only 1 amongst the 8.

I will get my excuses in first, the light was actually quite tricky, and totally against for the closest views, so pics were a bit of a zooming compromise, but hey ho, it was a great Sunday local mini twitch and social, and what better winter migrant to grace it ! 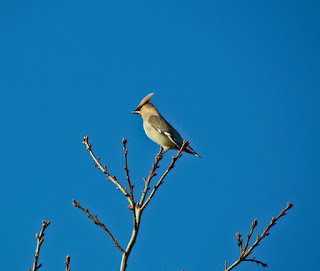 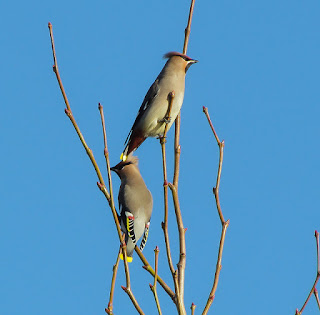 Last Thursday I made an eagerly anticipated sojourn to the English mecca of birding, the north Norfolk coast. What I had hoped would be a veritable welly filling exercise in year tick's, lifers and high quality birding ended in abject frustration as I was 'done' by fog.
It was foggy when I left my house at 5.30am, foggy all the way to Norfolk. However, the local radio 'KLF FM' assured me as I entered Old Hunstanton that it would 'clear by lunchtime'. It didn't,tossers, and by 2.30pm despite continually nudging further eastwards in a vain bid to escape it,  it was rolling in thicker and faster than ever.
The locals were no comfort "settin in for a couple o'days " they all said to a man, chewing on their piece of straw. So whilst I think I went to Norfolk, I barely saw any of it, certainly no actual coast , save for a couple of yards of sea whilst stood on Cley beach, where I found myself contemplating doing a Regginald Perrin.
Highlights, 3 Marsh Harriers, Cettis ( heard),Guillemot (very close to shore of course), Turnstone, Brent Geese, getting home.

Mipits save the Doorstep Doldrums

As it was such a nice morning I decided to walk my patch, despite finding very little about the previous day.Thankfully I had been to Elmley Lovett on Saturday and at least enjoyed a few Redwings and Fieldfares, but the patch was really quiet.On Ladies pool a LBB Gull and 2 Cormorants of note. Walking on, Green and Greater Spotted Woodies and a Nuthatch. The Buzzard was on its favourite perch.

As I descended down into the Paddocks a couple of Ravens could be heard, and continued to frequent the area for the rest of my tour, occasionally resting up on a Pylon with a different pair of Buzzards .The occasional Skylark showed but bird numbers ,save for the large Corvid and Woodpigeon flocks on the fields, were low.
With all the disturbance on the paddocks of late ( laying of Water pipes), there has been a noticeable lack of Linnets, but as I climbed the path back towards home I picked up on a group of birds flitting from grass to fence line. Expecting to see the welcome sight of a few Linnets, I was delighted to see that they were largely Meadow Pipits, with the occasional Linnet about too. Altogether I reckon about 20 Mipits, which despite the interruption of a dog walker and her 2 wandering hounds, hung around long enough for a record shot.This is my 1st record of Mipit in the Barnet Brook area, and was a most pleasing find after a good few hours of not much else this weekend.

Wigeon on the Doorstep


It was nice and quiet as I approached Ladies Pool this morning, and cutting through the air was the unmistakable call of Wigeon. I had a seem some  there a few weeks ago, but they were at the far end, and in eclipse. Today there were 2 very smart males and a female. The one male was initially reasonably close so I took a quick bit of video of one calling, and the other can be heard replying. The rest of the circuit was fairly quiet but  I  needed the  walk, and I found out a few interesting things chatting to a couple of fellow locals, hopefully stuff I can see for myself and  utilise on the blog at some future point !
Posted by Mark 2 comments:

I was minded to try my luck on Saturday up at Titterstone Clee. There is always that possibility of a good passage migrant, a decent Raptor as well as a bit of fungi should the tumbleweed be blowing through on the birding front.
I took pity again on the house bound Jason K  ( not because his car was still in for repair, just generally because he is Sandwell FC fan ) and collected him as I was passing, and we  crossed the county line into Shropshire.
Soon we were up at the summit of Titterstone where conditions could best be described as 'a bit fresh' and rather misty. However, encouraged by our hopeless optimism, we proceeded to do a thorough working of the site, to see what we could winkle out.
Passerines were very thin on the ground, and save for a few Meadow Pipits things were very quiet. As another wave of  mist rolled over, we were beginning to think it could be 'one of those days'. However things picked up as a nice pair of Stonechats showed, the male looking very smart, even with viewing hampered by the poor visibility.
Round by the old fort, we enjoyed nigh on  50 Ravens whizzing around having fun on the breeze, which was worth the admission price alone.
The fungi was a little disappointing, save for some Snowy Waxcaps.
After a couple of hours, and not much else to report save a Buzzard, we headed down to the working quarry. Optimism had been fairly dampened by now, we had barely counted a handful of species, let alone a rarity.
With grim determination we continued to scan and listen when all a sudden we thought we were onto something. We flushed a bird that flew away low towards the quarry, the brief jizz just did not look right for a blackbird. Heading into the viewing area at the far end there seemed to be some passerine activity where the rocks were trapping the sunlight. There on  a ledge was a male Ring Ouzel. Unfortunately it only showed few a few seconds before disappearing over the ridge. However after doubling back, we reconnected with it again briefly 20 or so minutes later.
This was my third Rouzel of the year, and my first autumn bird ever, and a good reward for  the  graft and teamwork we had had put in in less than ideal conditions !