Is there no end in sight to this bitterly cold weather ? I've had enough of layering up and slipping around. You can forget mothing ! and non of the few migrants  we would now be expecting to see are venturing into Doorstepshire.

On Monday I popped to Upton Warren. The Flashes was quiet save for 4 Avocets, a couple of Oystercatcher's and a few Curlew so I headed to the Moors. 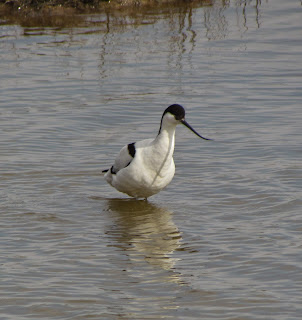 After leaving the car I noted a raptor heading south, away from me, over the Moors towards the Flashes, but gradually circling to gain height. It wasn't a Buzzard, and it wasn't a Red Kite, but with a brief bit of  sun the bird was in silhouette. I had to let it go.
I noted with interest that later that day, a Marsh Harrier was seen on the reserve...was it that bird arriving ? I will never know.
Anyway, I headed to the hide.On my way I flushed the Water Rail, and in the hide picked up a Common Gull among the Black Heads. Both year ticks, so not a disaster.


As the Marsh Harrier decided to hang around, I decided on Wednesday to chance my arm and see if it would show for me. I had seen one at Upton before, but very distant and not really satisfying.
When I arrived it had gone to ground in the Reeds. There was a Little Ringed Plover present which was a nice year tick


Lucky for me, as the cold sneaked into my feet, it took to the air and gave a nice display between the second and third flashes. It's a very pale bird, likely a female, but be interesting to see what info is gathered from it's tag.

Searching in vain for Spring

The weather continues to take the mickey. Yesterday I trudged through the snow/mud in the name of patch birding, and again today.

On removing wellies, one toe had falllen off due to frost bite

Churchill pool held 20 odd Canada's..infact one of them is very odd, one that has hybridised and has a large orange bill, will have to take a longer look when the snow is not straight into my bins.
Back on the Lane, lots of Redwings along the Brook, looking desperately for food. Up on the hill, c12 Linnets were doing likewise, as were 3 Meadow Pipits later on ( these are the first Mipits I have seen on the noth side of the patch ). The latter hardly blinked when I nearly fell over them, I felt really sorry for these birds, slim pickings to be had.
Despite the severe conditions, I watched a flock of Skylarks up on the stubble field on the hill. A Kestrel was periodically hawking them, flying low and fast. Enjoyed that spectacle, even with the snow feeling like needles on my face.

I will be checking this out later in the week, as well as reading the book when it arrives 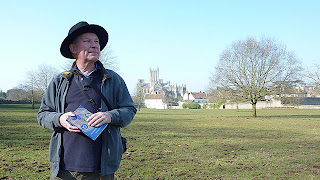 Presented By Matthew Oats (above)
Here is the programme synopsis from the BBC website...


"Edward Thomas (1878-1917) was arguably the most accomplished and profound writer of English rural prose, with a unique poetic-prose style. His reputation rests almost entirely today on his poetry, the one hundred and forty four poems which he wrote in the last two years of his life, between December 1914 and December 1916. In January 1917 he embarked for France and the Battle of Arras in which he was killed on April 9th, 1917.
As a prose writer Edward Thomas is often overshadowed by his poetry, but over Easter 1913, he set off on a cycle ride of personal self-discovery across Southern England. In doing so he was hoping to reconnect with the countryside he felt he had become disconnected from, having lived in London for some time. This journey was published in 1914 in his book "In Pursuit of Spring" and it remains a poignant reminder of one of our greatest countryside writers, who just a few years later would die on the battlefields of World War One.
Over Easter 2013, naturalist Matthew Oates pursues his own personal homage to Thomas by following in the literacy cycle tracks of the Edwardian writer one hundred years before. Throughout the series, academic and travel writer Robert MacFarlane, an admirer of Thomas himself, will read passages from Thomas's work which illustrate the man within. Rather than faithfully recreating the earlier journey, Matthew aims to recapture the spirit of self-discovery as he travels through southern England to meet people who can explain Thomas, the man behind the writing.
In this series of four programmes Matthew Oates will be travelling to Steep in Hampshire, where Thomas lived, and where he wrote his most famous works. Not far away in Coate near Swindon is the home of Richard Jefferies, whom inspired Thomas. In Gloucestershire, Thomas lived for a few short weeks in 1914 with the Dymock poets, here it is believed he began to reject prose for poetry under the influence of his great friend Robert Frost. The series ends by the Quantocks in Somerset, the scene of the great romantic nature partnership between Coleridge and Wordsworth.
But as Thomas travelled across southern England in 1913, was he aware that the life he had known, and more importantly the countryside which gave him solace from his depression, was about to abruptly end. Unwittingly, Thomas has provided today's reader with 'Mirror of England' taking us back to a simpler time when the horrors of a European conflict were yet still beyond comprehension."

Something to look forward to, and a reminder that things could be worse..
Posted by Mark 2 comments:

Last weekend, 2nd March, my focus was on a Grimley visit. It was a lovely spring-like day, and Sling Pool was chuffing with the spectacle of c600 Lapwings. A sight that was a throwback to the olden days ( so I'm told) Whatever, it was a joy to see. There were good numbers of Wigeon too, as well as Tufted, Gadwall etc.
Over on the Camp Lane pits there was a stunning male Pintail, which took flight for a while, circling the site and calling. I then connected with the Goldeneye's and eventually one of the Smews. Kingfishers zipped around. All these cracking species even better in the some of the first decent light of the year. Grimley is stand alone the finest piece of wetland in the area at present. It's great to have an area like this locally that reliably is producing the best birding around week in, week out.


Later in the week the weather finally picked up enough to warrant dusting off the moth trap. It was Wednesday when I nabbed a new species, a nice fresh Dotted Border.

By this weekend the winter was giving the cocky upstart that was Spring a bloody nose. It didn't matter as Saturday, I attended the annual Worcestershire Biological Recorders meeting at Worcestershire Wildlife Trust HQ, Smite Farm. A most entertaining series of talks by County experts on subjects including Dragonflies, Water Shrews, Bumble bee's and Grasshoppers. The guest speaker was Dr Helen Roy, who spoke engagingly about her passion, Ladybirds. The underlying theme throughout was "Submit your records" !! and I would encourage all those who regularly go out and observe the flora and fauna to make the effort to submit biological records, it doesn't take much effort and provides so much valuable data.You can subscribe to the Worcestershire Recorders for £17.50 per year. You get 2 issues of the Worcestershire Record, a great colour journal, and you get to go to these great meetings too !
What the day did do, was give me lift.Winter has dragged on now. One can draw a lot of inspiration from meeting dedicated and knowlegable naturalist's, and all that talk of Inverts helps you realise Spring might finally make a proper appearance soon !