Last Monday was the final day of my short break, and I was keen to get a final nature fix before returning to 9-5 grind. Problem was the weather was not very conducive to what I was interested in seeing so I delayed my outing and  caught up on a few chores.
Just after lunch, I decided to pop out to a local site just down the road, with no expectations, but nothing ventured !....
The site last year had produced a population of Scarce Chasers for the first time, so obviously it was of interest to see if this feat was to be repeated.Interestingly the larvae usually  have a 2 year life cycle.
As  I walked up the site the wind dropped and there was even a hint of warmth with a small break in the clouds...
A preliminary mooch around revealed only a  few of these Azure Damselflies

and a Common Carpet Moth. 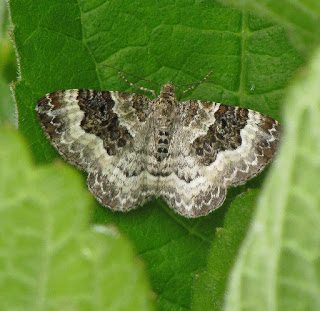 As I walked back along the path however something caught my eye, quite literally, as it was perched at eye level...A Teneral Scarce Chaser !


After watching it for a few minutes it moved further down the path and up into the higher vegetation. Following the path I saw possibly another ( it could have been the same one ) rise from a few yards away and head also for the trees. Nevertheless I was really pleased to connect with this species again and it is encouraging that there is a slight possibility they may become a fixture for a little longer.
Posted by Mark 2 comments:

Mothing Update..fruits of the garden

I have made a concerted effort this year to run the moth trap on a regular basis. Last years wet and horrible weather made it a poor  both for moths, and the running of a trap.  My enthusiasm waned as the summer rained on, resulting in a total of 33 pecies recorded. A baseline to work from at least.
This year I resolved to invest more effort in the trap when the weather would allow. I am also motivated by collecting data for the Garden Moth Scheme and partaking in a bit of friendly competion with Garden Moth Challenge  ( although I can only aspire to avoid the wooden spoon )

Whilst general moth numbers remain low, at least I have encountered some new and interesting species so far, and already surpassed last years total, having now managed to record 37 species to date for the year.
Of note in the last week or so have been 3 real corkers, Pale Tussock, Swallow Prominent, and a monster Polar Hawkmoth."Sexy" moths like these really make the 5am job of picking through the trap worthwhile and help counter the frustrations of trying to ID Pugs and "little brown jobs". Photo's of other species recorded can be seen via my Flickr link.

Another recent garden venture was the construction and placing of a bee hotel in the to try and encourage solitary Bee's etc to utilise it. After work the other day, inspection revealed a visitor ! here's hoping for a few more and some over winter utilization.

Wood White's and the Butterfly Bonanza

On Friday I ventured into a new part of the Wyre for me, hoping to connect with a species of butterfly that is fairly rare and localised, the Wood White.
It was a warm and sunny morning and as I walked towards the forest, I strayed onto a bit of  common land to see what was about. Almost straight away a Small Heath Butterfly settled on the path near me. I didn't even see this species last year , so it was most welcome sight.

As I dropped down into the area I was aiming for, there were good numbers of Speckled Yellow Moth and the occasional Fritillary. I was hoping to see some Small Peal Bordered Fritillaries but at this point couldn't get a clear ID on any.

Walking a bit further on the density of the Whites increased and I was finally happy I had found Wood White.


Here too were good numbers of Dingy Skipper . Finding a pair copulating was as good as finding the Wood Whites, and I managed this bit of video.

The walk back to the car was hot and I was parched, so a quick Shandy at the pub where I had parked was most welcome before heading home, it's thirsty work this butterfly hunting !