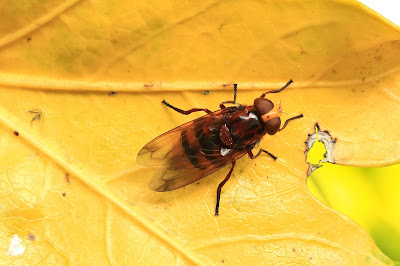 The moth scene through May and the first half of June was dire. After a few days away I returned with renewed enthusiasm, as I couldn't help but notice fellow moth-ers were starting to cheer up on social media.
The last 3 nights have been a veritable moth-fest compared to the last couple of months, and numbers have risen night on night. More importantly, I've trapped a couple of corkers.
Firstly, Obscure Wainscot. This can wander into gardens but is largely restricted to a handful of  wetland locations in the county.


On the back if that, the following evening I landed my first Alder moth. Not rare, but not something I see other folks recording that often either. A smart moth, and as the Macro garden  list grows, each newbie is appreciated.


The pain of all the early morning checking of an empty trap is beginning to fade.
Posted by Mark 2 comments:


My last encounter with Hornets was watching numerous workers gorging on Ivy in the Autumn of last year.
Shortly after arriving on the South Western edge of the patch on 30th May,  just a few yards from the Ivy,I noticed something large and yellowish dart into vegetation in my peripheral vision. I could only think initially it was a Broad Bodied chaser, but a few minutes later a loud low buzz emanated in nearby vegetation and a Queen Hornet appeared.
Their size really takes you back, a solid 5cm makes it looks a formidable beast. It mooched about for a few minutes, down in the grasses and Cow Parsley, allowing me to get reasonably close. Unlike their Waspy cousins however, they are fairly chilled creatures as long as you pay them respect. They are the sole survivors of the nest, and overwinter tucked away in a tree hole or such like.


Yesterday I had a similar morning encounter at the southeastern border of my patch, and then watched as the beast, of similar dimensions to the first, flew towards its probable nesting location. At a height of about 12 feet, the flight is fast and straight like a mini yellow Cruise missile.

My third sighting was the same afternoon , at the northeastern edge. A Hornet of  possibly slightly less stature hummed into a modest Oak and spent a minute on an Oak Apple. Presumably it was hoovering out the Larvae within. An interesting bit of behavior to witness. 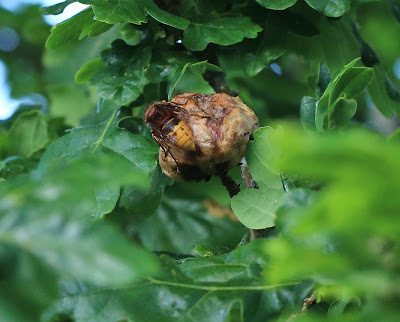 I'm not sure what the range of a Hornets territory is. The three sightings make up a triangle whose sides are roughly 0.5 KM as the Vespa crabro flies.
Posted by Mark No comments: