Redstart a great start to the weekend

Having identified a little bit of the patch as a potentially good spot for picking up a migrant or two, I was more than very pleased with myself when it did just that at the start to the Easter break. Whilst scanning the hedge line out popped a stonking male Redstart. He proceeded to work up and down the hedge and then actually flew over to me and showed in the tree next to where I was stood for a while. The header photo is my hastily taken record shot.

Now while all this was going on, a few yards away a Wheatear popped up in the adjacent field on  some sheep shite. .Again, a hastily grabbed record shot, but who cares, what a patch 20 minutes ! 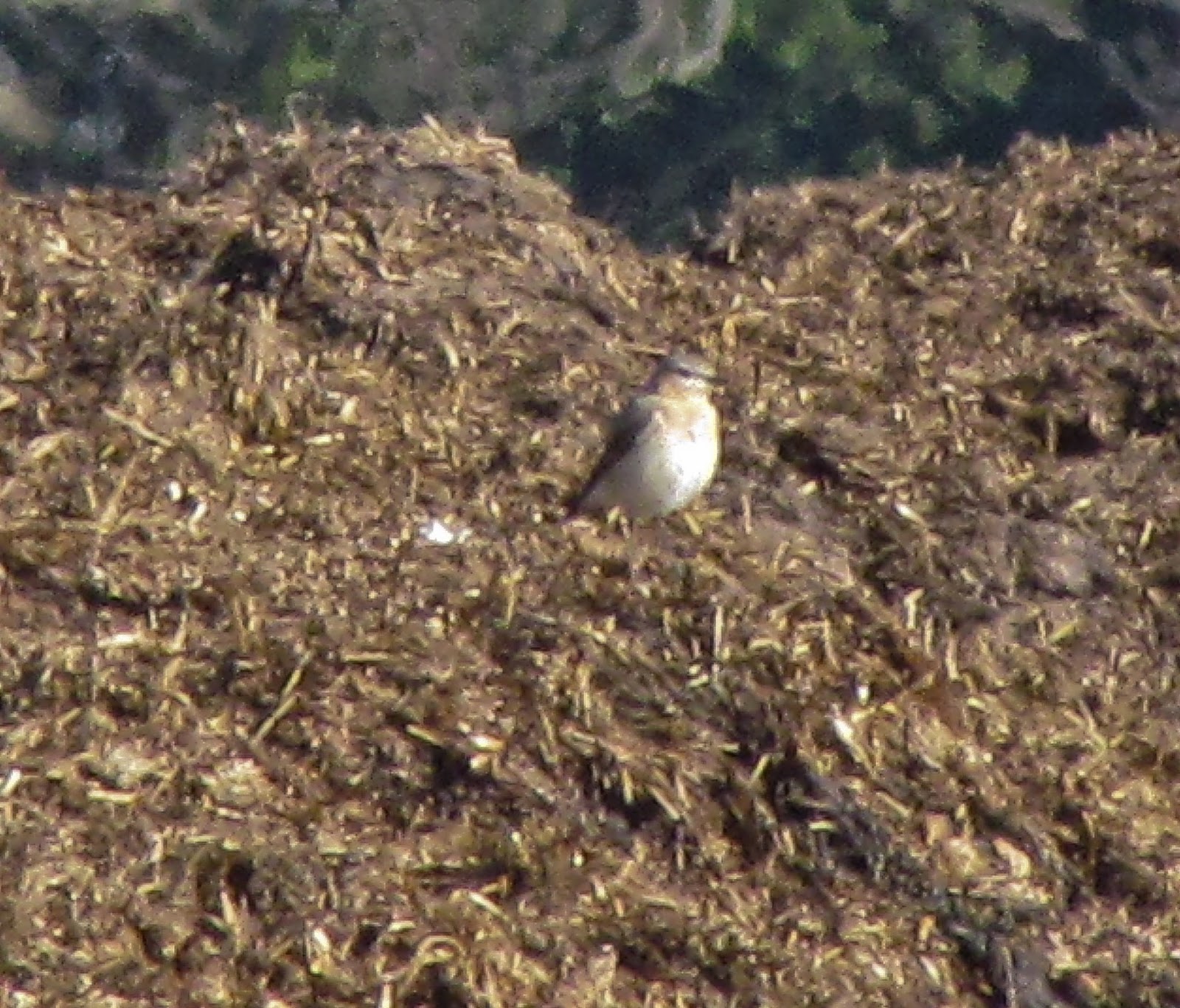 This coupled with the arrival of my first Whitethroat and House Martins of the year gave a birdy boost to the patch pan list.

The first Speckled Woods of the year have made an appearance too, as have some Nettle Tap Moths. 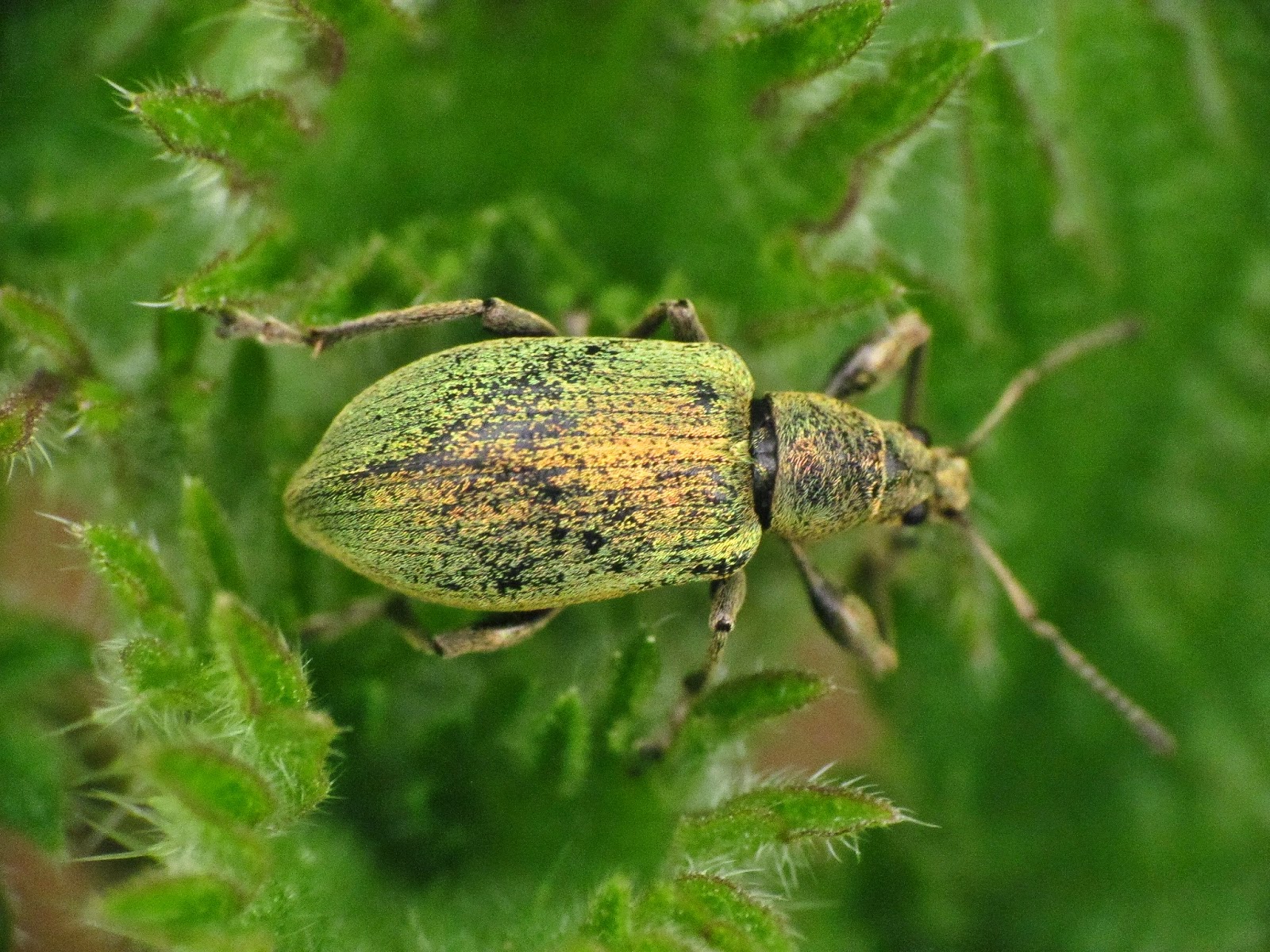 This solitary bee was enjoying a Dandelion, those with far more knowledge than me tell me it is Andrena ( melandrana ) Nitida 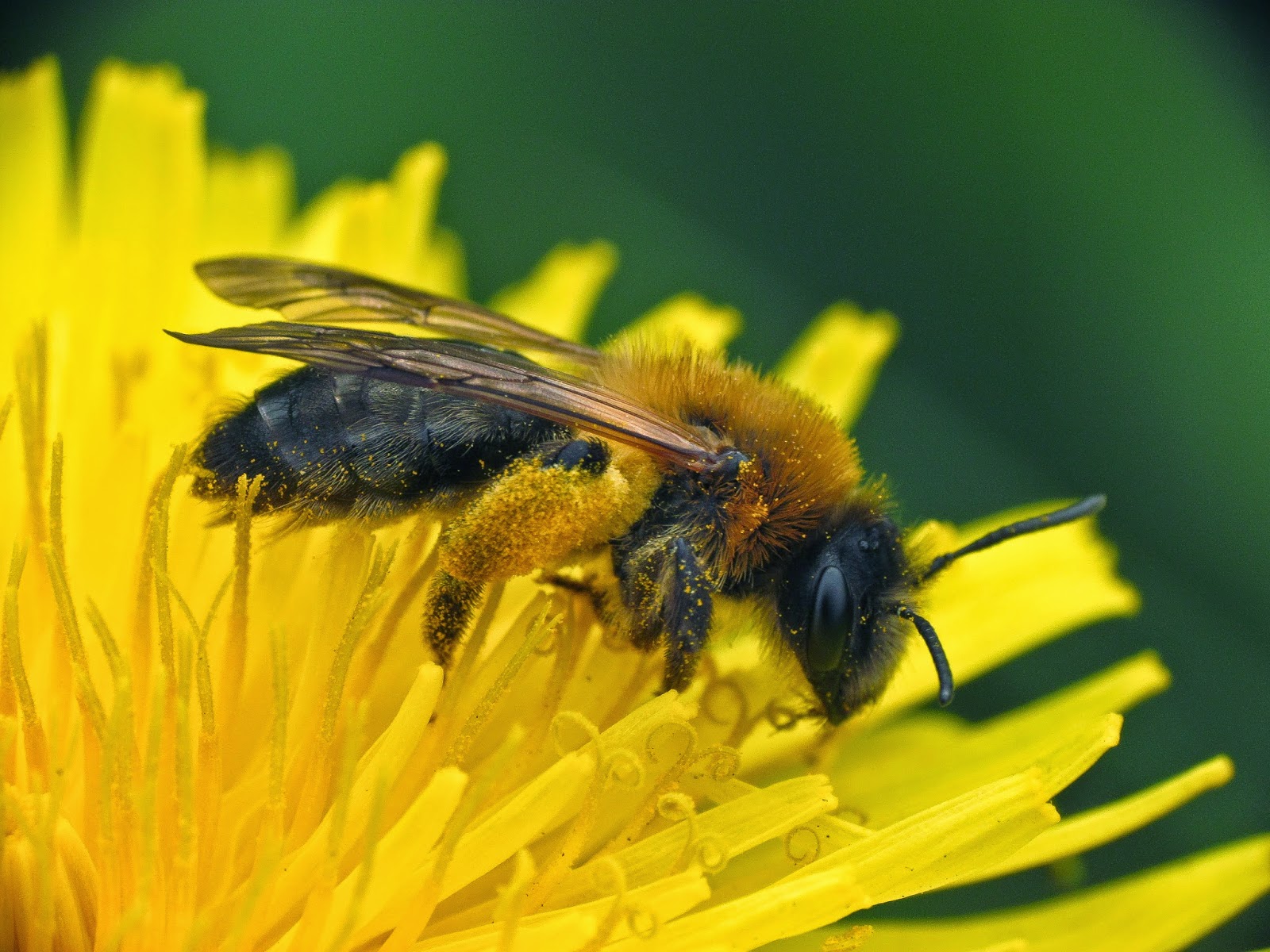 Oaks really rock. Not only are they chuffin  at the moment  with micro's but I also picked out my first Oak Apple Gall of the year, caused by the wasp Biorhiza pallida  and close by, an Acorn Weevil

Finally the plants, its a love hate thing but they are growing on me.I'm grateful help is at hand.
Wood Avens, Mares Tail, Garlic Mustard and Ribwort  Plantain are welcomed onto the patch pan  list, which now stands at......

Couple of weekends ago there were plenty of Brimstones, and a single Chiffy. This weekend Chiffchaffs and Blackcaps were very well represented, and Swallows were settling in rising numbers.The first patch Orange Tips were in good numbers also, mostly male.


Another Butterfly species also made an appearance in slightly lesser numbers, namely Green Veined Whites, including this pair who got straight down to producing some more of the species.

Sunday was excellent on the invert front and other new species from the lepidoptera  representatives came in the form of two species of Micro moths.


On the Ladybird front,7  Spots were everywhere. There was the occasional Harlequin too. It was nice to find my second 10 Spot, looking a bit more mature than the one I had in February.


Even better, this 14 Spot Ladybird was a patch lifer nad the XXth Ladybird Species so far this year.


The Hoverfly species Helophilus pendulus   was another year tick for me 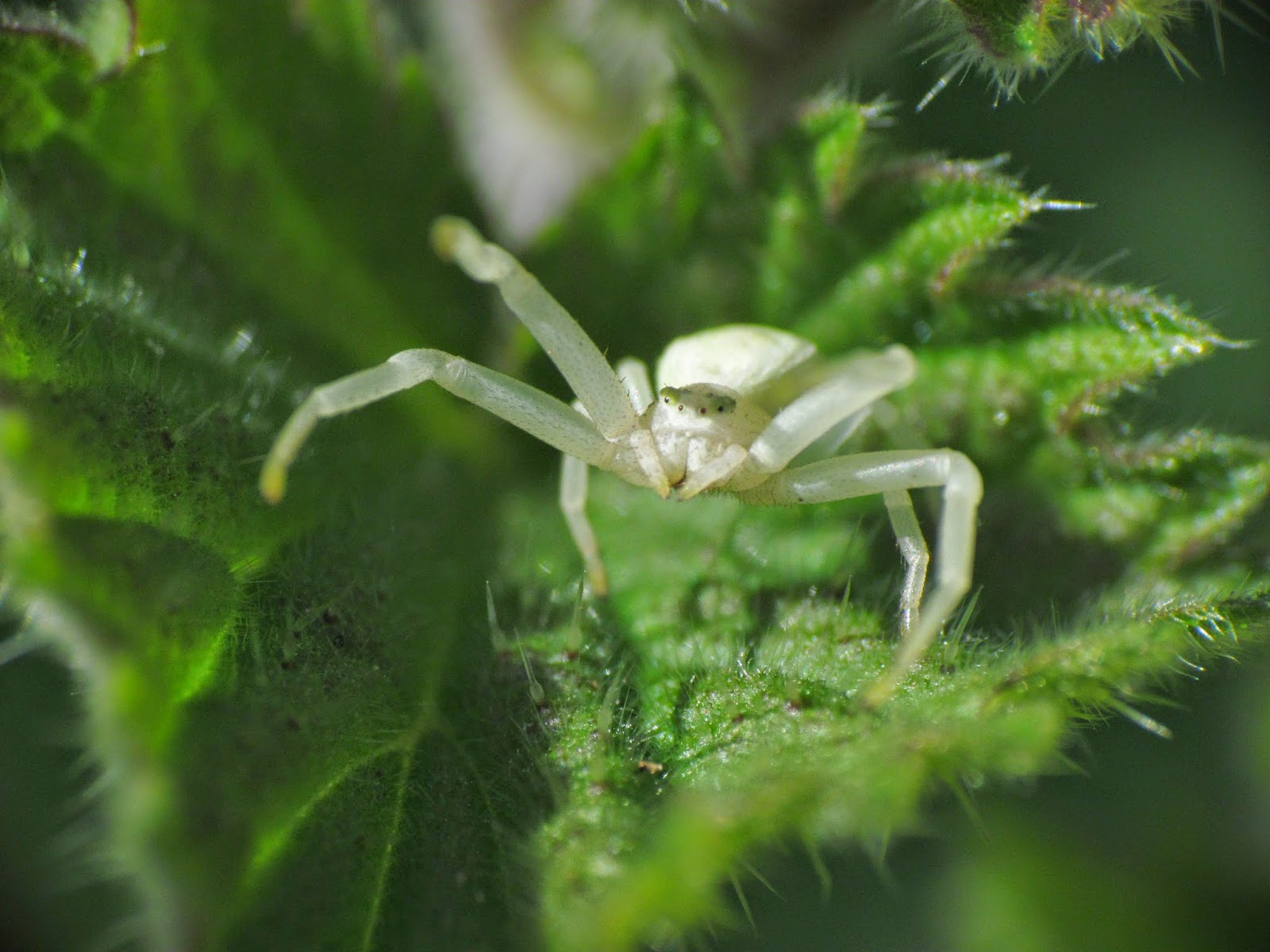 In among the nettles were a few Green Shield Bugs,


And finally,  the plant  Groundsel tagged on for good measure.As ever , a few species being ruminated over for later, but with no target in mind, I was pleased to finish the weekend with such a nice selection.

It was all looking  very uninspiring on Saturday when I suddenly noticed my first Swallow low over pasture heading for the paddocks where it performed for best part of an hour. On Sunday there was a single individual again on the south east edge of the paddocks , despite the mizzle. What a welcome sight !
By Monday at least 2 seemed to be settling in.
Otherwise there were no birding surprises but plenty of activity noted and heard, including this Yellowhammer back on territory. 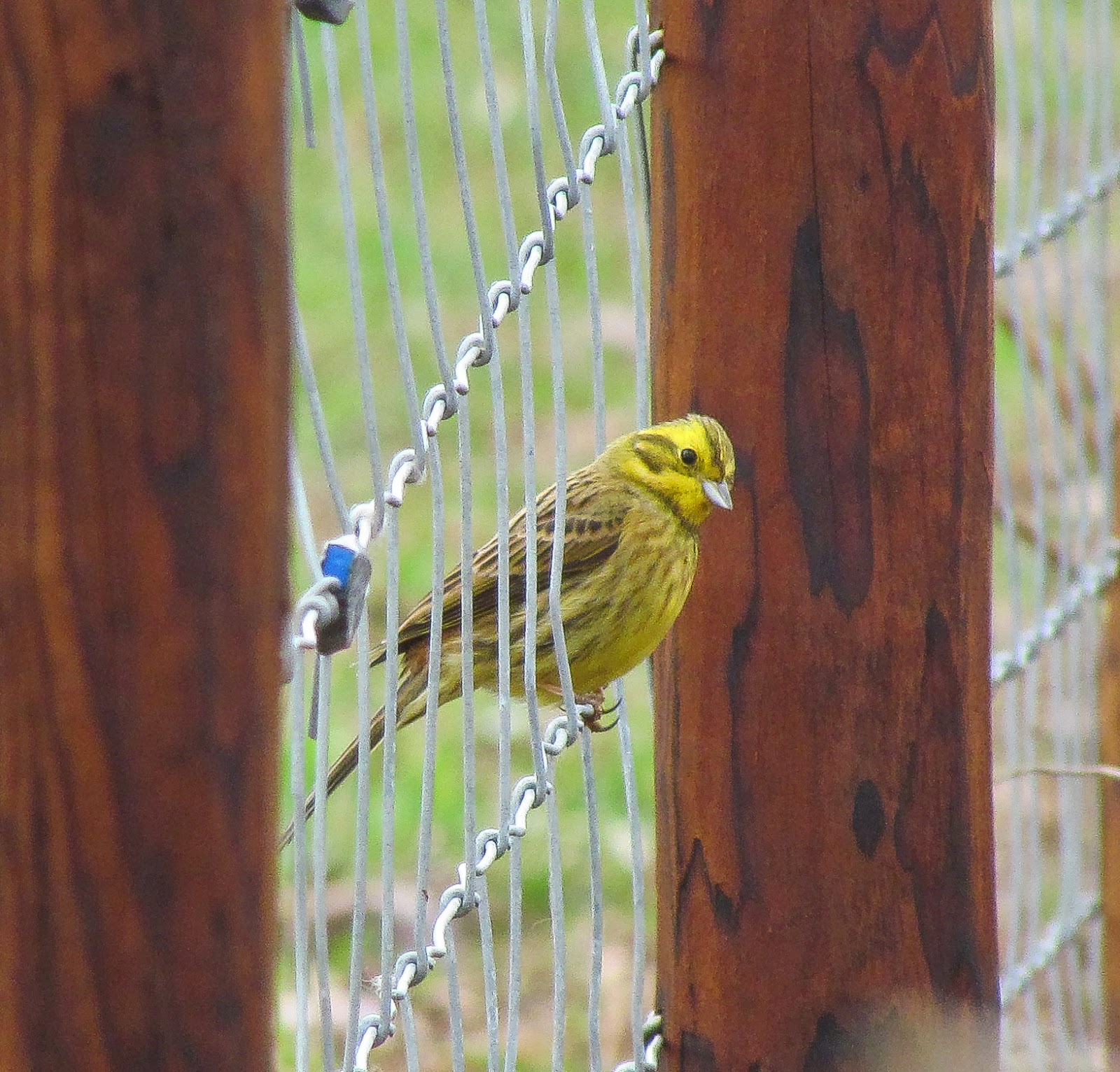 A Common Carder Bee was my only invert addition on patch. Off patch.. A walk around Monkwood that afternoon produced a stunning but flighty male Orange Tip, as good an early date as you will get in this neck of the woods I reckon. There was a  glorious carpet of  Wood Anemone's , and  Primroses and Wood Spurge were abundant and spurned me on to flower bash the patch the next day. 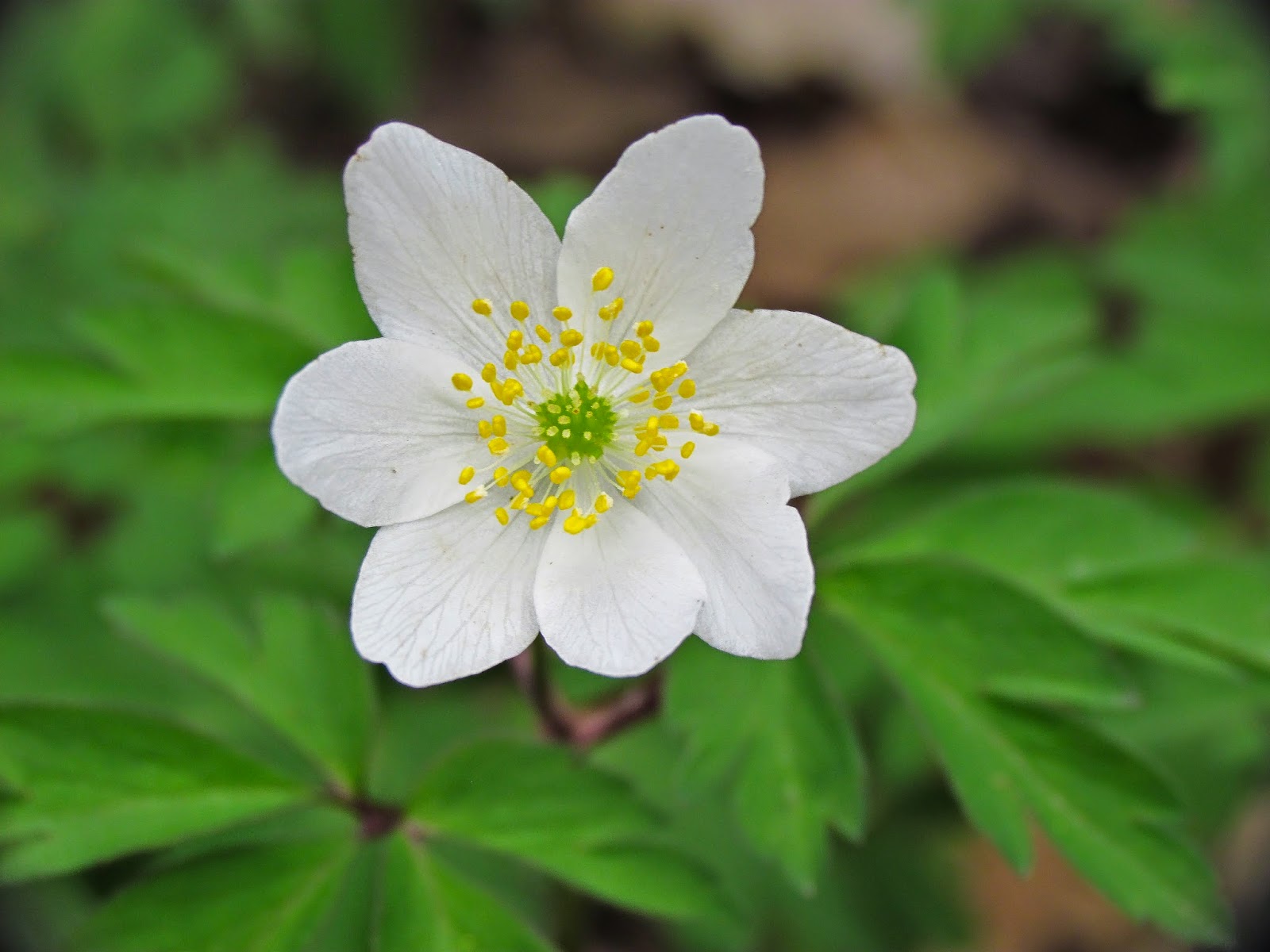 Back on patch.It's amazing the changes in just a week, but there was so much blossom all of a sudden. At ground level I recorded the following, and there is plenty more growing into a state I can hopefully identify soon. Here are the record shots of what was found and identified, it was far too windy for anything better !
Green Alkanet 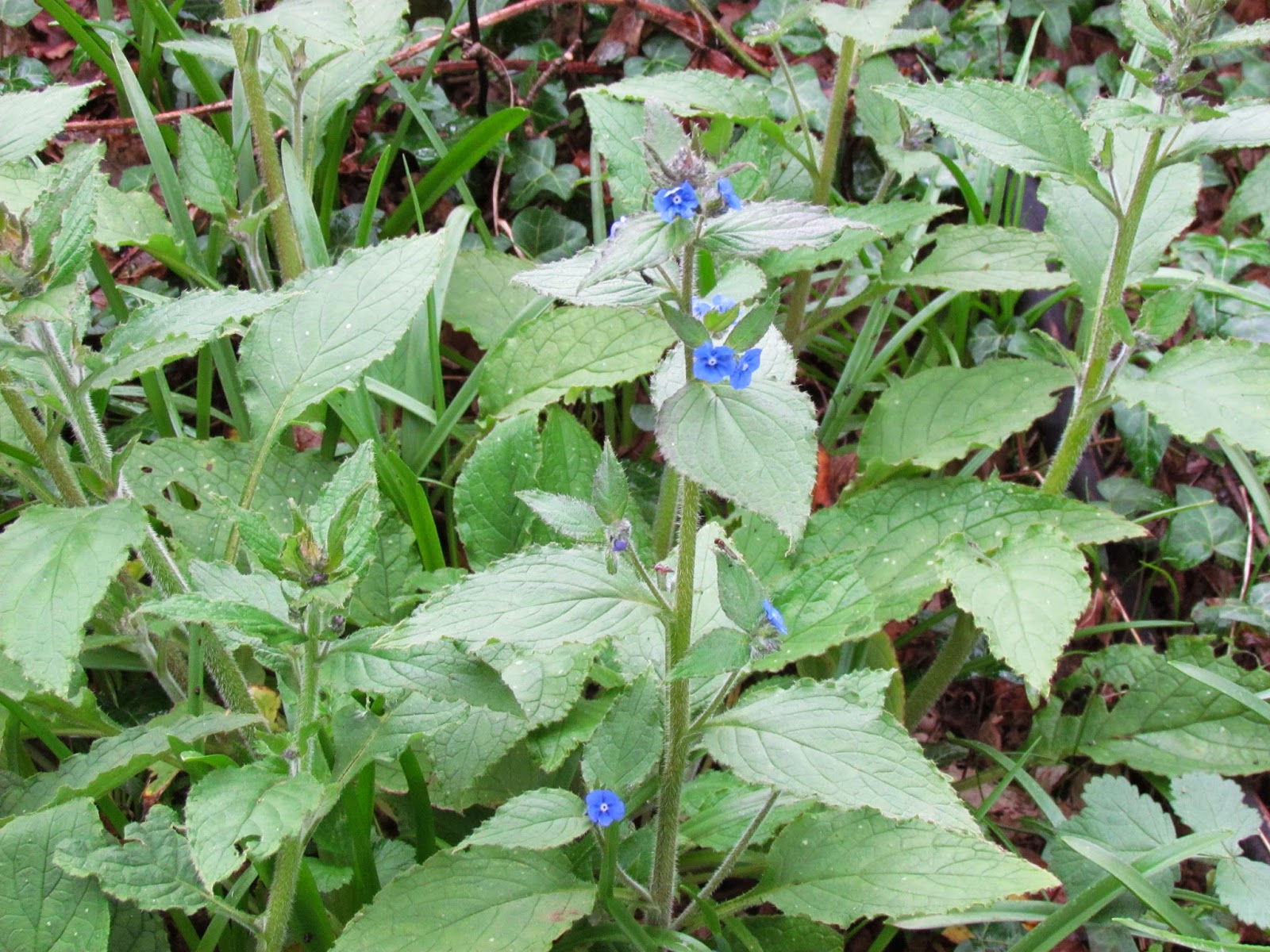 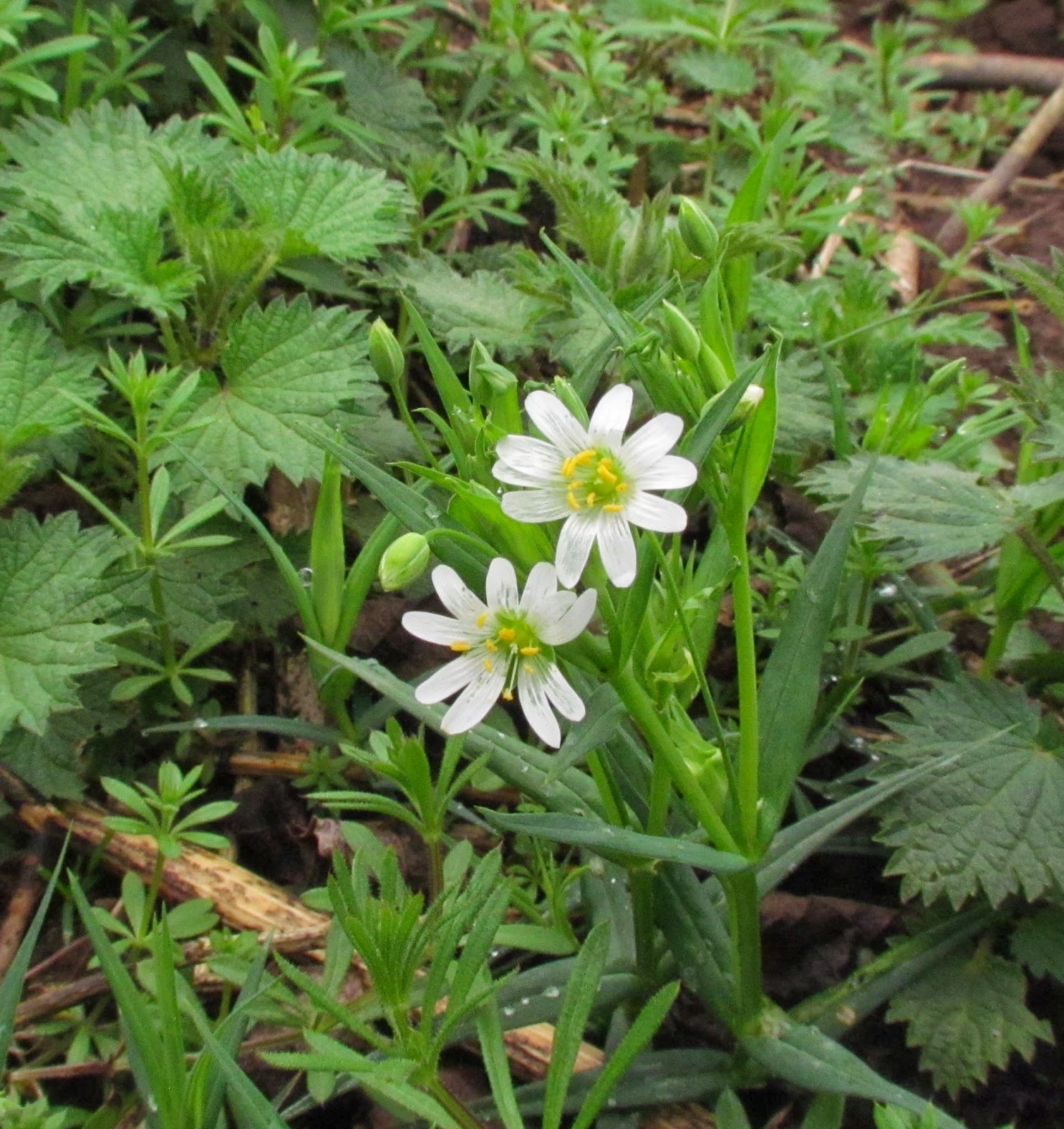 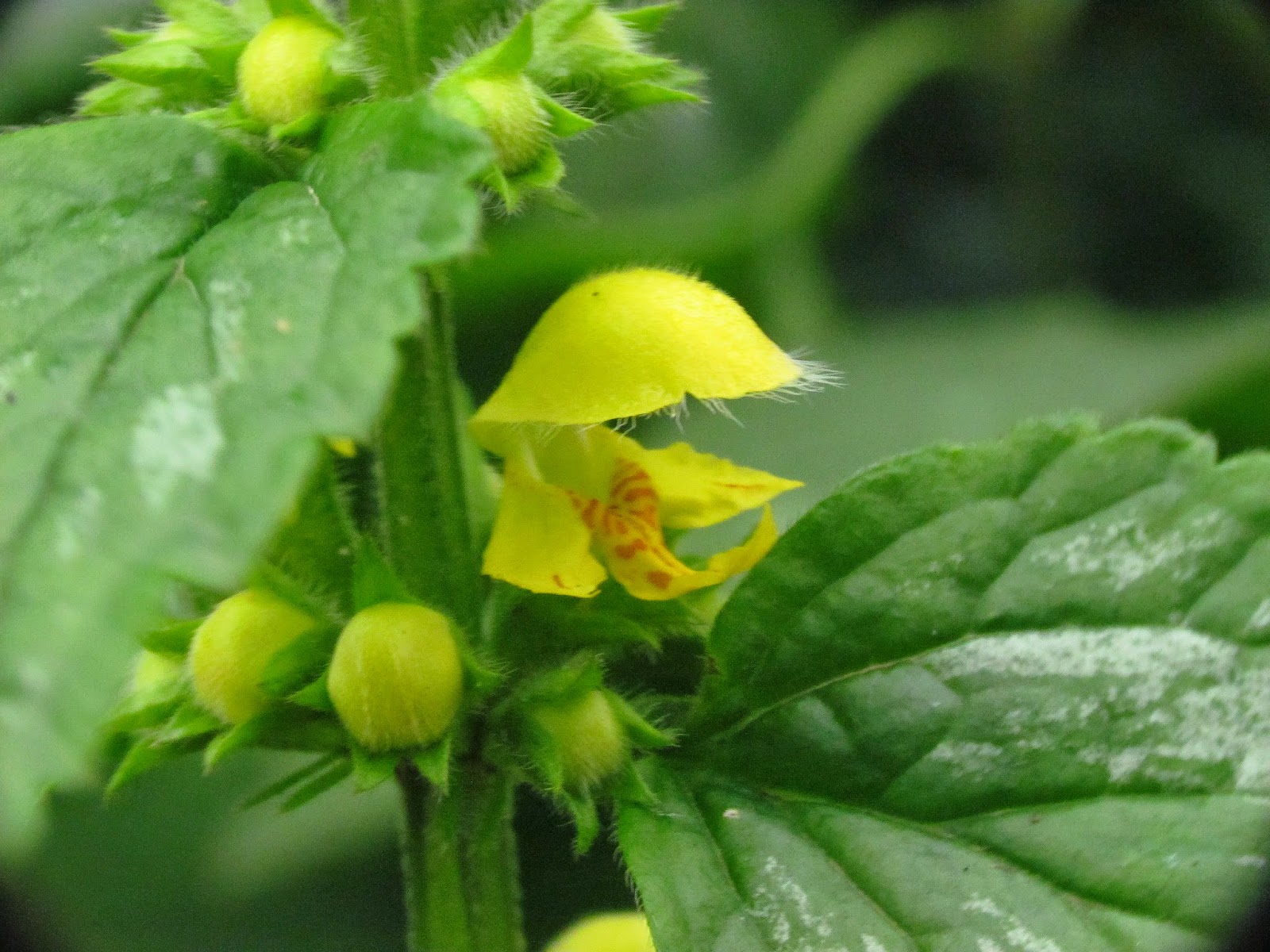 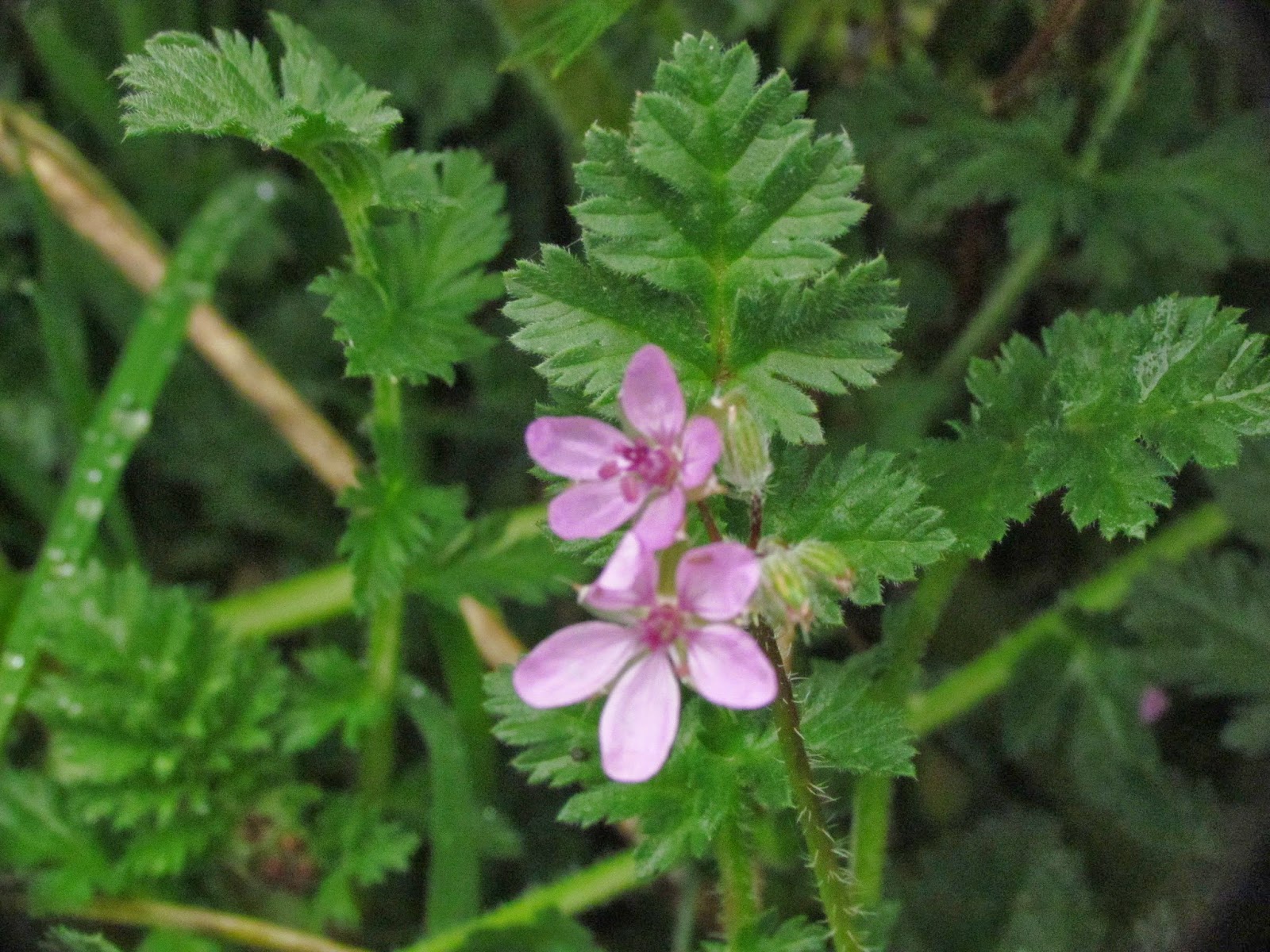 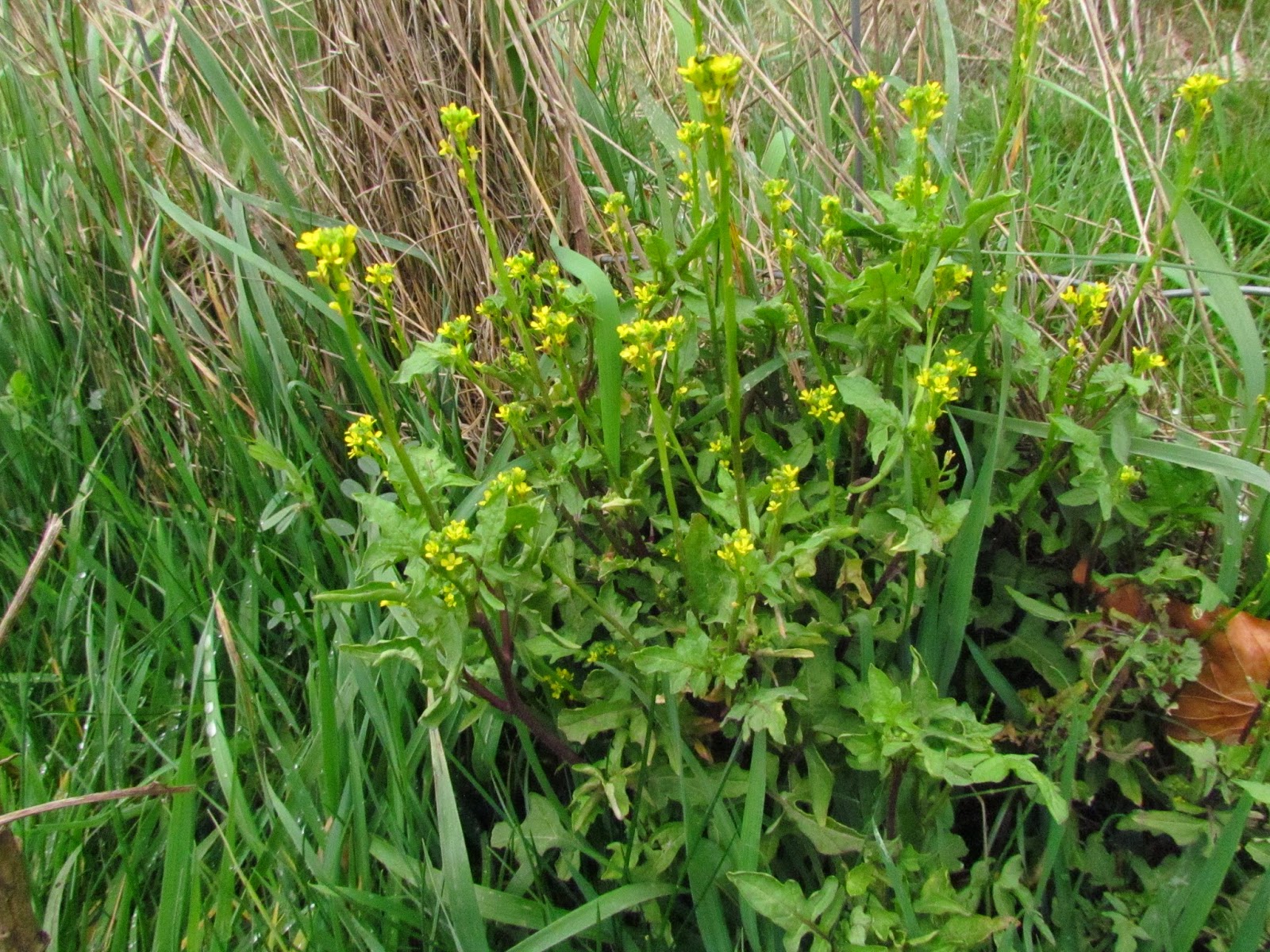 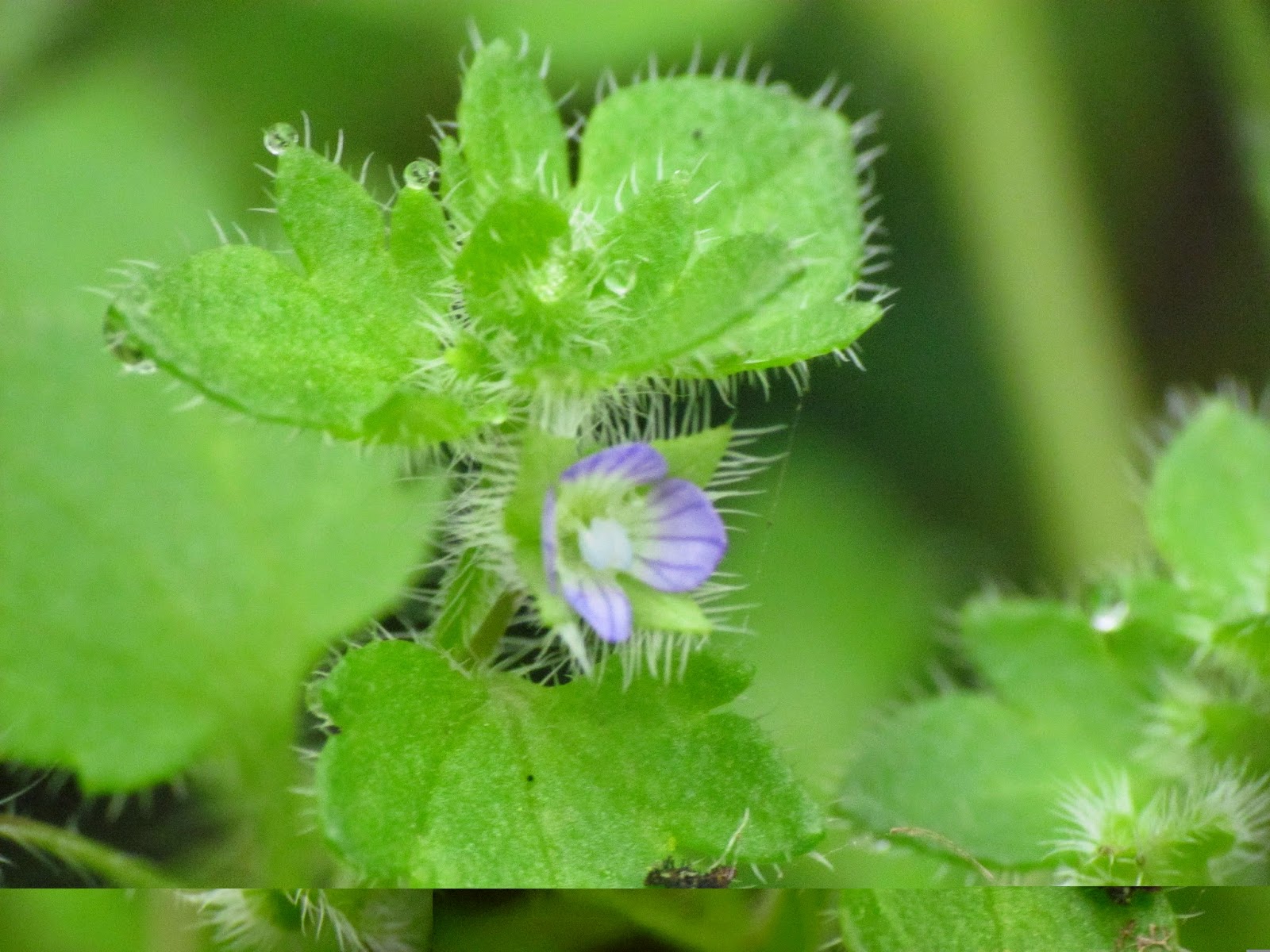 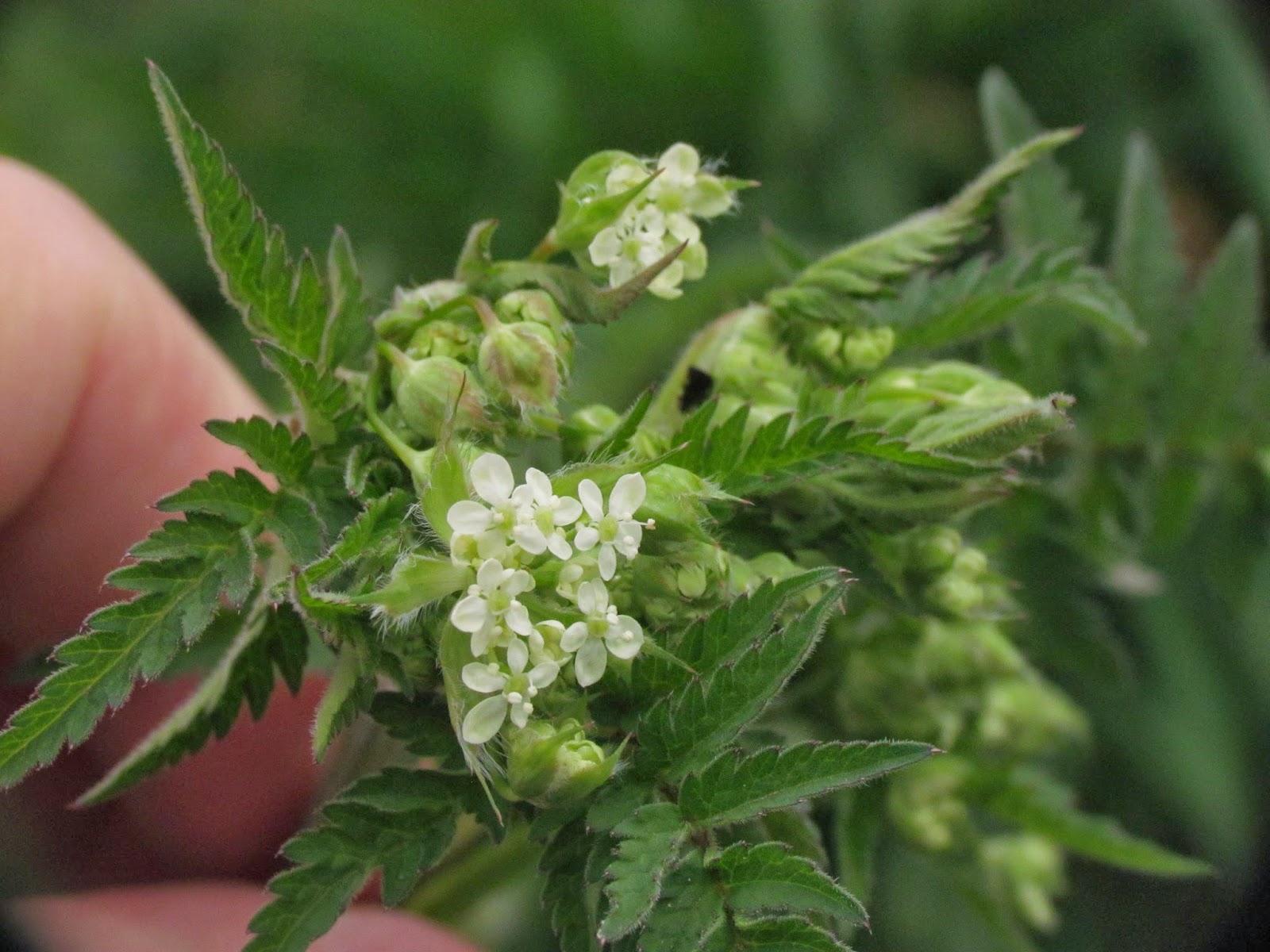 Another surprising find while scrutinizing the deck, was some small yellow fungi. Quite unexpected for this time of year, but a welcome addition to the patch pan list was Yellow Field Cap. 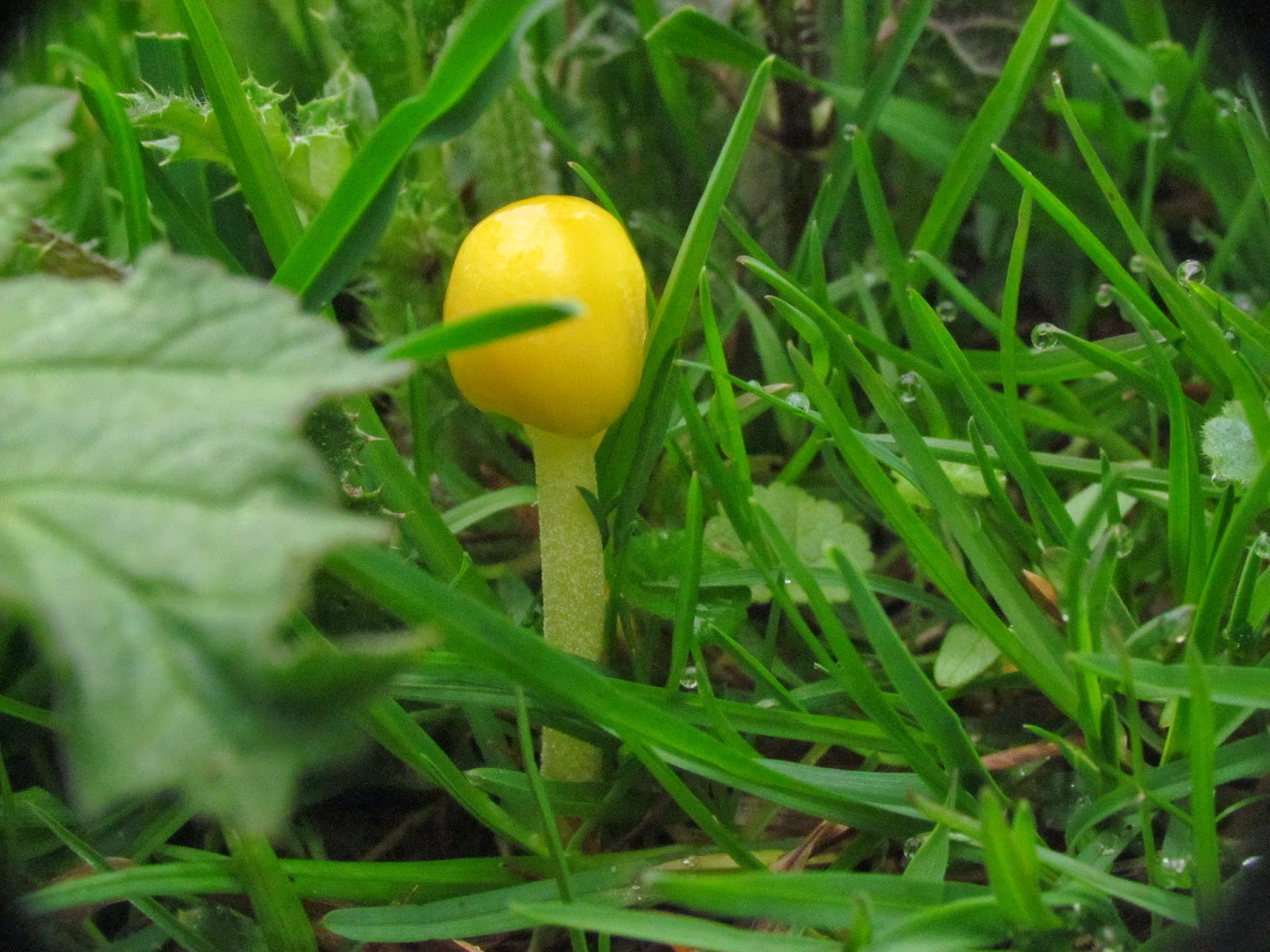 Plenty of Peacock butterflies on the wing , as well as Comma's, Brimstones and a few Small Torts.  I also had a White sp..it was either Small or Green Veined, but he went to ground and I just couldn't find him.
An early visit to the patch hoping for Wheatear instead yielded Red Legged Partridge, a year first, as was a noisy Blackcap the next day. So, 64 species of bird in the grid now this year.

Revisiting around 10.30, just as it was warming Saturday, I immediately came across new  inverts. This Tawney Mining Bee was warming itself 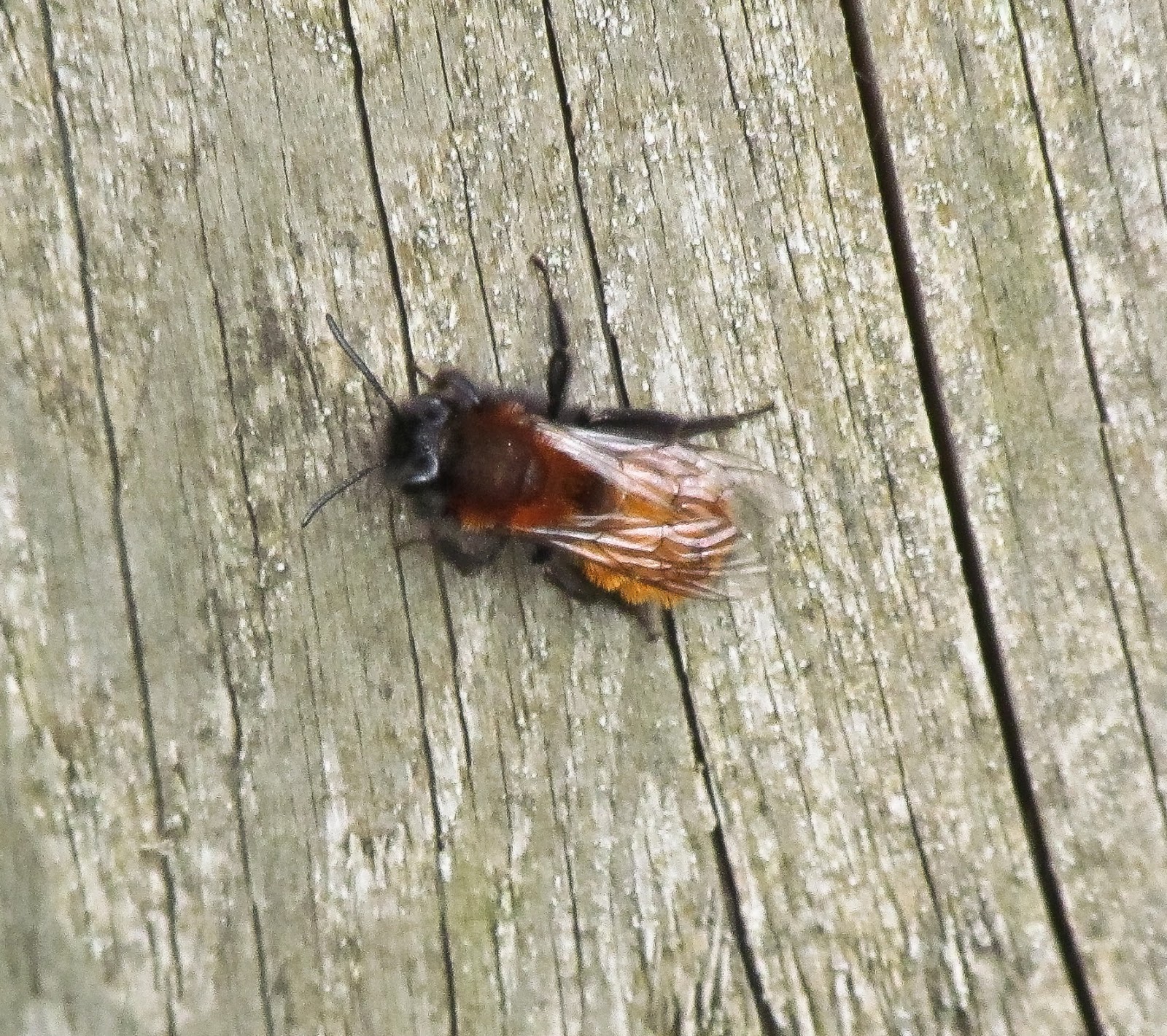 And this Scarce Footman Caterpillar was, I swear, the same one I photographed in November on the same fence post ! 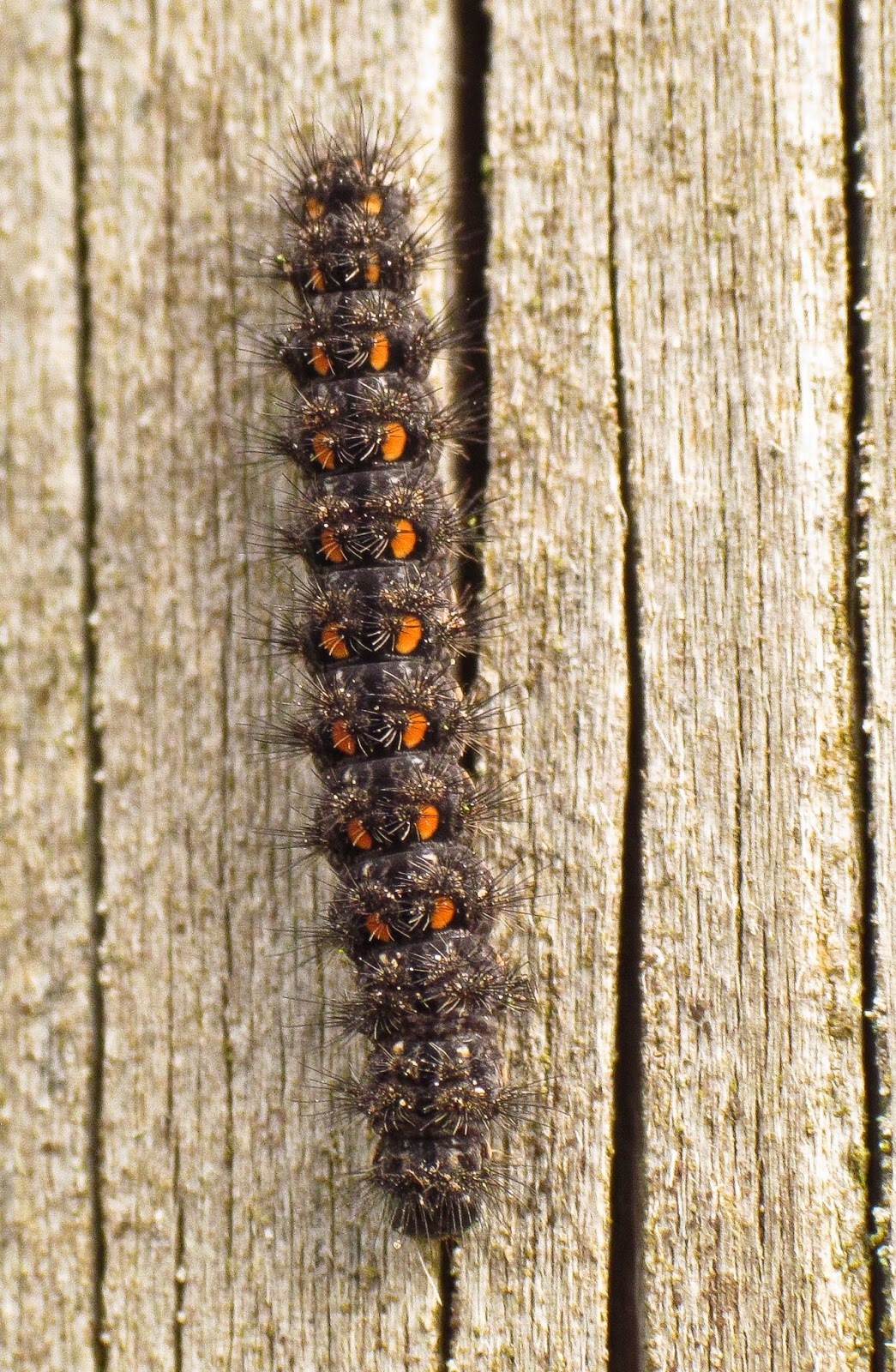 A section of Goat willow has been productive, and on the adjacent ivy I noticed this critter settle. Thankfully I was able to eventually get him with the superzoom. A Bumble Bee mimic Hoverfly called Eristalis intricarius 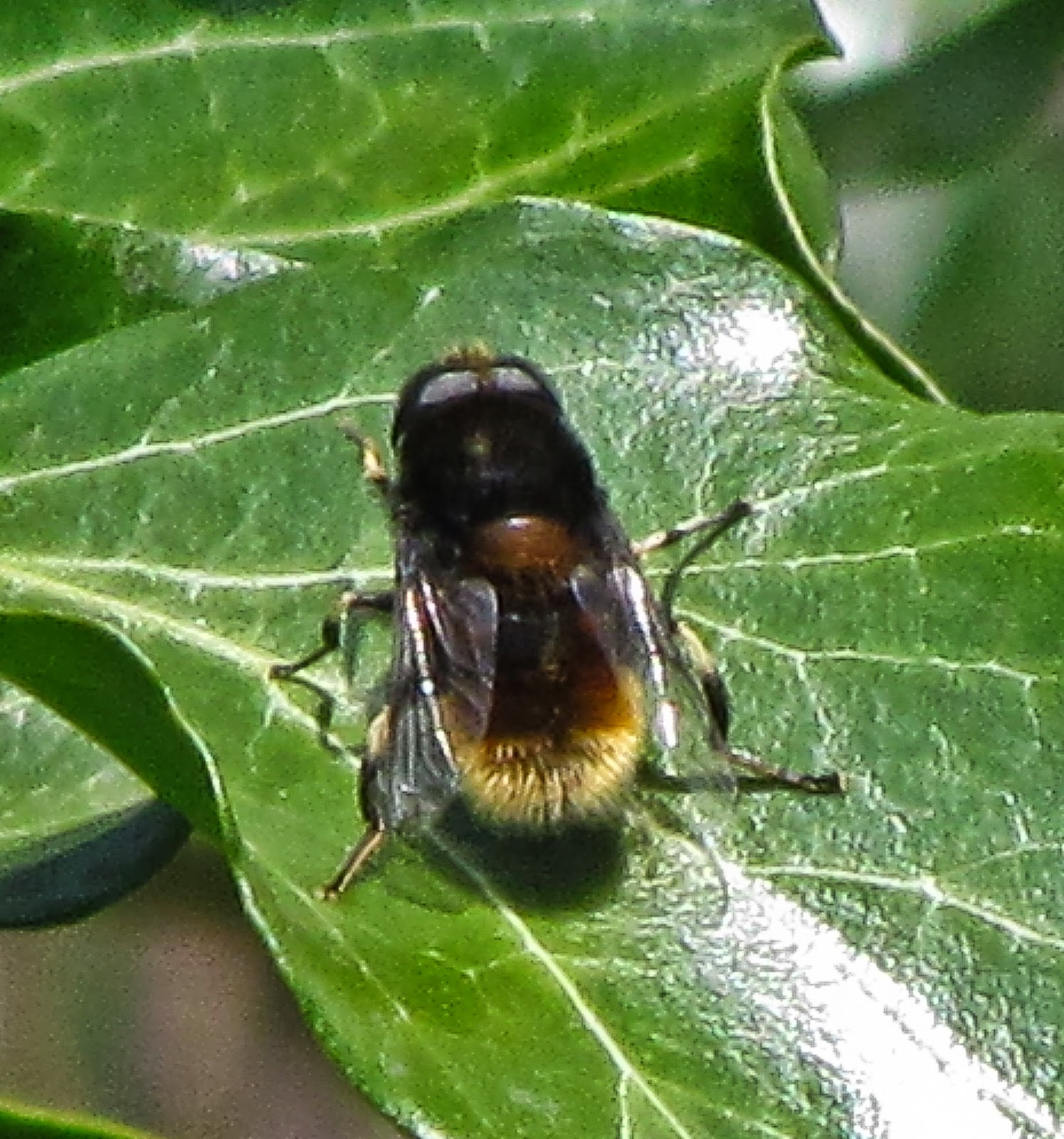 I hadn't managed any Hemiptera for the list up to this point, but a single Dock Bug and several colonies of Pied Shield Bugs got me off the mark.

Fence posts are wonderful things. Also out catching a few rays was this beetle, Oulema melanopa 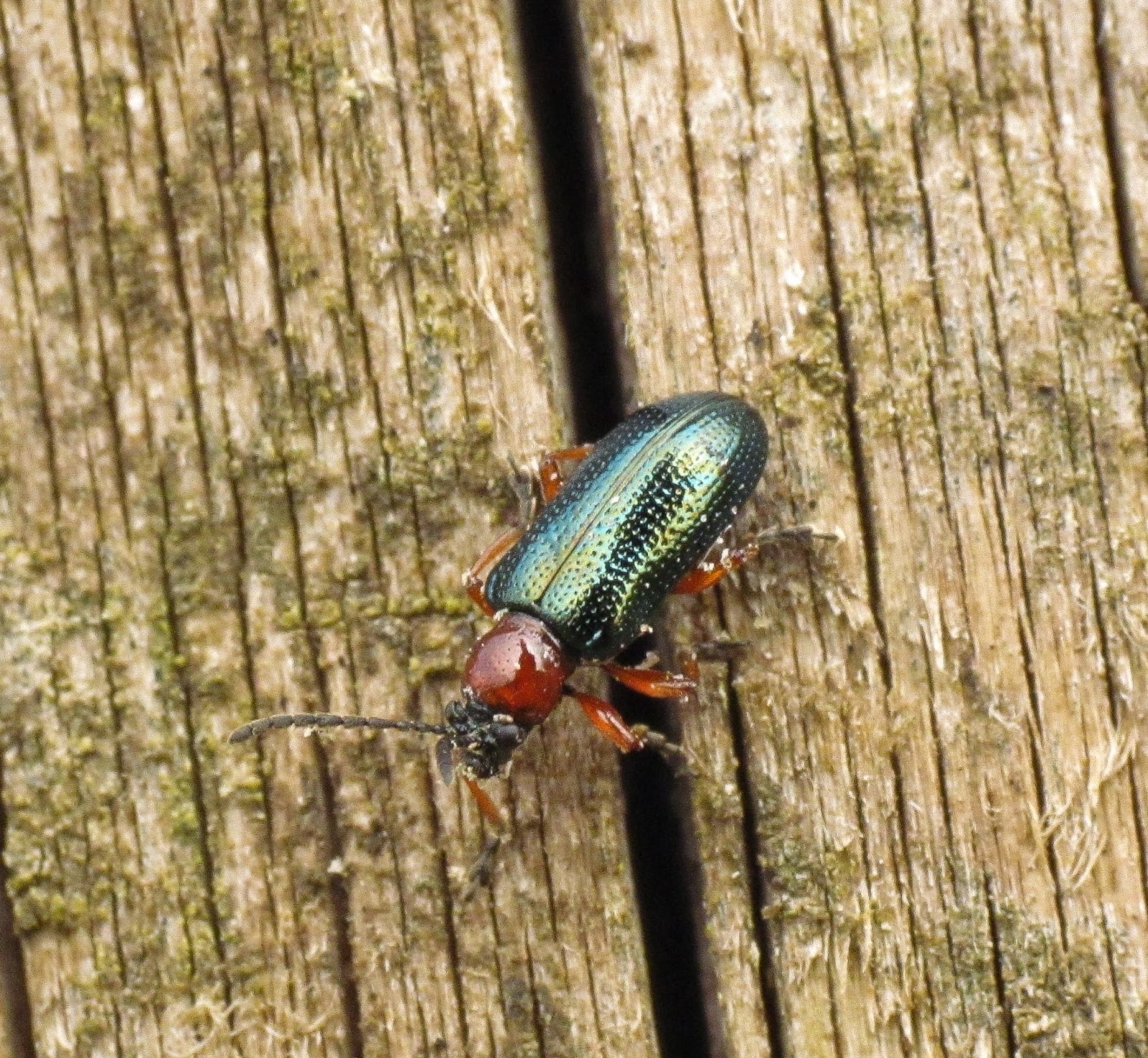 Plants. Hmm. Work in progress. I added Ground Ivy (which was very popular with the bees ) and Sweet Violet, a small cluster of scented flowers lurking in a sea of Lesser Celandines