A trip to Grimley produced an instant pleasing result when it became apparent there was a fresh emergence of Common Blue Butterflies. They have been so thin on the ground the last couple of years. 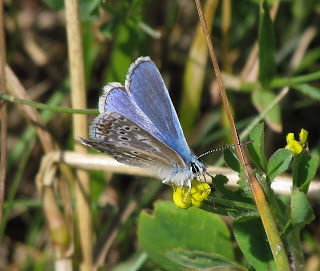 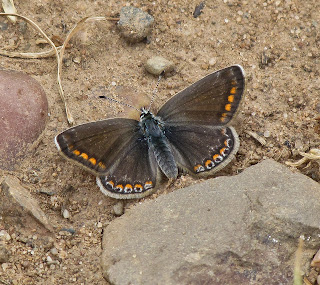 No Red-vein Darters seen this time, I suspect they have gone over now, but an Emperor showed really well. I sat down a while hoping he would settle, but he just glided past every few minutes, nice and close though. While sat there. a Common Darter gave a nice photo opportunity instead. 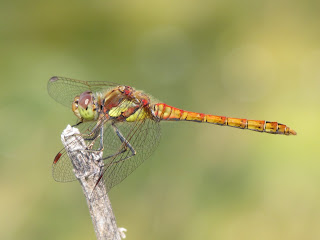 I had only seen one Small Copper all year, happily on my patch at least, but I was chuffed to find a pair copulating nearby. Lying on the floor I was able to film them, and get some close up's you probably don't usually see

In the heat of last week, it was necessary to get the nature stuff done in the morning. I got to Grimley around 10am and spent a couple of hours enjoying the activity around one of the pools at the north end.
The water was fresh and clear but receding alarmingly, potentially stranding the fish that were clearly visible in one part. All around the Pool Marsh Frogs were either calling or hoping out of sight as I passed.

A stick relatively close to the boggy shoreline afforded me the opportunity to get reasonably close to a recently emerged Damselfly. Below it, it's exuvia, and below that lots more exuvia of the ones that had preceded it.

Within a few minutes the teneral damselfly made it's maiden flight a few meters into the longer grass where it stood a chance of maturing further away from predation.
Also on the wing were Emperors and the smaller but more numerous Black-tailed Skimmer. Many of the latter were copulating. Teneral Common Darters were also present in decent numbers.
I then bumped into fellow nature nerd and birder JT. We spent a good while speculating on a few red coloured darters that were ,well, darting around and occasionally perching up. Unfortunately the perching point was that bit too far off for my close focus x 6.5 bins I had chosen for the morning, and a bit too close for his scope !
The general initial feeling was possible Red-veined Darter, but the lack of optical assistance and very harsh light made picking up the salient features very difficult, despite a fair stint of observation. In the end the feeling was they were probably Ruddy Darter's, still a year first. However, I had my superzoom camera, so took the best pics I could of the pesky beast.
Fast farward a few days and I was trawling through my pics, and checked out the mystery darter. To my surprise I had a reasonable-ish image that showed yellow pterostigma with a black border,and a definite red veinining to the wing ..!
To be sure, I contacted the county expert Mike Averill who confirmed the ID as a muture Red-veined Darter.
This was the first recording of the species this year in VC37. It occurred on the same site in 2012 ( when I was lucky enough to see and photograph them ), and previous to that was recorded in the county on that site  in 2002,2003,2006.

A pleasant surprise in the woods

Well I did go down to the woods today, and I had a nice surprise.
I was not surprised to see plenty of butterflies on the wing at Trench Wood, owned by Worcestershire Wildlife Trust. But it was another 'Scorchio' day and  the two species I was most intent on seeing were invariably the most flighty. White Admiral and Silver- washed Fritillary are powerful flyer's and zip around at quite a rate, often preferring the high canopy.
So initially I contented myself with fleeting views from afar, and took a few snaps of the more common and obliging species

Eventually though I tend to find that if you are patient, and study a spot, they will come to you, and at least show a little better. There were good numbers of both Silver-washed Fritillary and White Admiral which was pleasing to see after last year's dire weather.

The Frit was the first to settle for a couple of seconds, they are big fellas really. At least a record shot was possible in the end
As I was sweating up a bit by now, and the light was already too harsh anyway for decent pics, I quickened my pace, just stopping off at a small body of water to check out the odonata situation.
Not seen many Broad-bodied Chaser's this year but there was a pretty fresh male perched up in the rapidly drying out pool. When I looked at it more closely through my bins I realised it was a nice male , with an exuvia next door ! What a stunning sight !

From there it was over to the Grimley area to see if there were any Marbled Whites about as I hadn't had any decent views of any thus far this year.
Fortunately they were in reasonable numbers, and I enjoyed 20 minutes of them giving me the run-around before seeking the shade for the afternoon.

I make no apologies for the lack of birding content in the blog, now or over the coming weeks. My interest in the summer season deepens year on year into the world of inverts. Of course I still bird, but there is nothing really I can or want to blog about bird wise during the breeding season at present. Inverts present a challenge to ID sometimes, but I'm just enjoying what I see, I have the cold dark winter nights to nail all the names where they escape me ! In the end, it will all be submitted to WBRC ( Worcestershire Biological Records centre )
Last Saturday I started my day at Grimley. Here I encountered my first Meadow Browns of the year, c12.

In fact it was to be a day of firsts. There were plenty of Azure and Blue-tailed Damselflies, but it took me a while to nail down my first White Legged Damselfly of the year, an immature ♀ , in the lactea ( milky- milky ) phase.

Shortly afterwards, the first Black Tailed Skimmer of the year broke cover. I had 2 on the site in total, well down on numbers, and hankering down the grass


There were two other nice sightings before moving on. A single Silver Y moth,

and a bit of orthoptera, 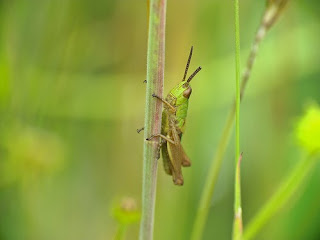 I then popped to Monkwood village. The Burnet situation is poor at present, just one flyby. The only invert of any real interest I saw was this Yellow Shell Moth. However I did find what looks like a Common Spotted Orchid, I'm currently in the process of checking the ID, along with the Orthoptera. 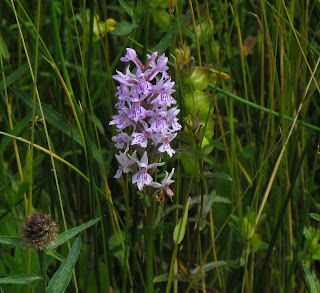 It was then onto Monkwood. I had no huge expectations to be honest, but it was warm and pleasant and  as I headed to the pools, I came across my first Large Skippers of the year. 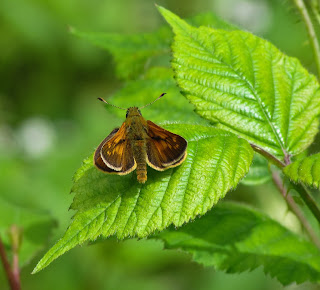 There was plenty of  Diptera buzzing about, I'm glad I deeted up, much as I love inverts, you can be eaten alive at this place if you are not careful !
Anyway, within a few seconds of arriving at the pool, I had Emerald Damselfly in front of me. This was a bit of a surprise, I honestly didn't think they would be around yet, given the lag this year, so it tuned out to be a first record for VC37 so far, which was nice.
And the day didn't end there. Not Only did I watch a fairly teneral Emperor Dragonfly( a year first too) munching a Large Red Damselfly, I also was lucky enough to see a colony of Brown China Mark Moths and some more Orthoptera in the shape of Dark Bush Crickets
What a corking day !

More images on my flickr
Posted by Mark 4 comments: